There’re currently two smart bulbs that are dominating the smart world. This can make it very hard to pick one. So, if you can’t decide, check out this LIFX vs Hue review, it will give you all the answers you need!

It’s the brightest of the two smart bulbs, but does that make it better? 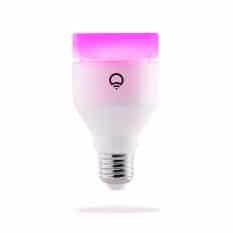 Philips is a massive brand, but how will it hold up against LIFX? 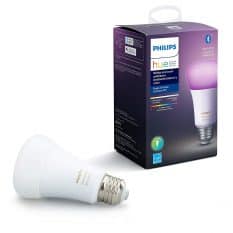 The smart light bulb is available in two different size styles the A19, and the much wider BR30 version.

And that’s not the only choice you get; the bulbs are available in a four-pack or a single pack, the option is down to you.

The bulbs take minimal effort to install, it’s a simple case of screwing the bulb in and connecting it to the WiFi.

By using the built-in WiFi you can control the smart light bulbs with your smartphone. Or If you’re looking for a hands-free experience, it can be controlled with voice assistants.

Because the smart light has built-in WiFi, it doesn’t require a hub to control it.

This allows you to set the mood with ease. Amazon Alexa can dim the lights, turn them on and off, or change your color settings.

The changing color lights have a huge selection you can flick through, 16 million colors in fact.

LIFX smart lighting claims to last you 22.8 years, which is based on using the light for 3-hours a day.

It’s compatible with several voice assistants, including Google Assistant, Apple HomeKit, and Nest. LIFX allows you to schedule your smart lights to come on at any time of the day, or you can take advantage of the day & dusk automation.

One customer had previously tried out Philips Hue lights before and was very impressed. But after trying LIFX for the time, they were thrilled. It was brighter than any of the Hue devices they’d tried, and they also felt it had a better color range.

Another person said they loved not having to purchase an additional hub due to LIFX having built-in WiFi. And although they found it tricky to get started, they loved playing around with the smart light bulb. The thing they found tricky was setting the bulb to the right WiFi frequency.

I really enjoyed the LIFX smart lighting, it had an excellent range of colors, and was very bright when compared to other smart bulbs. The whole thing was easy to use, which was down to the LIFX app; they made selecting new colors very easy.

Setup took very little time but could take longer if you don’t know how to set it to 2.4 GHz connection. Alexa worked seamlessly as did the scheduling. The thing I love about LIFX bulbs is how easy it is to integrate with other smart devices.

Philips Hue gives you a few more options for you to choose from, you have a few color selection: White, White Ambiance, and Color Ambiance.

The Philips Hue color ambiance style provides the user with 16 million colors to flick through.

Philips Hue uses Bluetooth to control the bulbs, which can be controlled by using the Hue App.

You can connect up to 10 bulbs utilizing the app, after that, you’ll require the Philips Hue smart hub.

You can also set up voice control by using Google Assistant or Amazon Alexa.

Philips Hue claims their light bulbs have a life span of 22-years or 25,000 lifetime hours. You can set up timers and routines to the bulbs, so it works for your schedule.

By using the Zigbee feature, you have the opportunity to connect them to motion sensors and more.

They ended up buying two Hue light bulbs and found them absurdly lifechanging. They felt as if the Amazon Alexa integration gave them a powerful boost. They now have smart lights in every significant lamp in the house. Luckily it was easy to install.

Another customer said they were very easy to use and setup. They brought them because they wanted the ability to dim the lights without the need for a dimming switch. It was also lovely to either use Bluetooth or the hub. Another person said he and his wife were pleased overall.

Hue differently gives you plenty of options to get stuck into, and it combines very well with other third-party devices. You have the option of controlling the smart lights using Bluetooth, or if you fancy splashing out, you can use the Hue bridge hub, which gives you more connection options.

Having built-in WiFi would be a nice touch but isn’t completely necessary if you have the hub. The colors were very good with the Hue, but not quite as bright as the LIFX smart light. The app works very well, but I did find selecting new colors to be pretty tricky.

Things They Have In Common

Philips Hue and LIFX may be similar in name, but they do have a few things in common, so let’s take a look:

Let’s start with both smart bulbs that can be used without the need for a hub.Which not only means you save money, but it means one less hub you need to set up and find a place to store it. 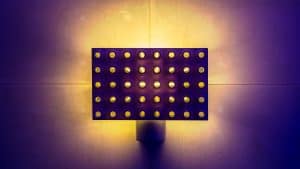 Although they don’t need a hub, Hue and LIFX use different methods of connection, but more on that soon.

Both of the colored bulbs give you a vast 16 million color options, which are bright and vibrant. Another thing they have in common is, they can both integrate with voice controls. You have several options, including Google Assistant, Alexa, and Apple HomeKit.

You can also set the bulbs up with IFTTT to add complicated recipes to the bulbs. Both products claim to have a lifespan of around 22 hours or 25,000 lifetime hours. And finally, both can be easily installed and used with geofencing abilities (LIFX + only).

For me, the easiest way of finding out which products will work the best for you is putting them head to head. Luckily for you, I’ve done all the hard work, so which smart bulb will win when we put the Philips Hue and LIFX head to head.

When it comes down to the price, you won’t see much difference when comparing both the colored versions; they both sit at just over $40. But when it comes to only white lights, the Philips Hue and be considerably cheaper than LIFX.

So, for this reason, I have to give it to Philips Hue; as a per-bulb price, it comes in a lot cheaper unless you’re planning to use ten or more lights. Anything over ten bulbs requires the Hue hub, which would raise the price.

So, LIFX wins here, it’s the brightest out the box, which means you don’t have to spend time in the settings. Philips Hue only starts at 535 lumens, which means you have to search through the white light pixels. And this takes a long time to do, trust me.

As you can see, these smart bulbs are killing off all their competition, and for a good reason, they’re both a fantastic smart bulb.

They both offer a considerable amount of integration options you select from. Both have a wide range of color options, dimming settings, and voice control. 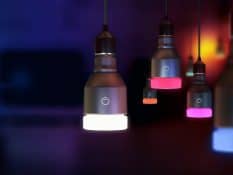 Choosing once really isn’t that easy, and it comes down to personal preferences.

If you want more information about smart lights, why not check out this full round up of the best light bulb security camera on the market

Can I Use LIFX With Hue?

It’s not looking too good for Wink at the moment; the company was previously owned by Quirky, who became bankrupt. Eventually, it was bought by Will.i.am’s digital company i .am+, but more recently, Digital Trends reported that stocks of the Wink hub had been running low for a few months now.

And there was more, Wink has released no updates since 2017, which to many people seemed very strange. Digital Trends also reported that i.am+ are said to owe $1,787,726.11 in taxes and interest. As yet there is no news of them going out of business, but at the moment it doesn’t look too good for them.

How Long Do Lifx Bulbs Last?

It’s a hard question to answer how long the LIFX bulbs will last. But, lets put it this way LIFX claims to be able to last for 22.8 years, this is based on the user using the bulbs for 3 hours per day. This works out to around 25,000 lifetime hours.

Do LIFX Bulbs Need A Hub?

The LED light at the front of the machine gives the user indications of how the hub is working. If your hub is blinking blue, it means it’s trying to connect to a new/disconnected device. For the full troubleshooting guide, check out this page.